I agree with Cersei, there is no middle ground. Judging by the lack of dialogue and disjointed editing, it’s evident that Benioff, Wise and George RR Martin believed otherwise. The middle ground they’ve given us in Season 8’s last six episodes of the most beloved epic series of all time is just short of being wasted film and a waste of viewing time.

Putting aside the unrivaled cinematography par excellance side of seasons 1 through 8, the GoT producers/writers and creator gave us five seasons fairly faithful to the books, two more seasons of believably relevant material that brought us back week to week and even inspired some of us to binge watch previous seasons (altogether I’ve seen S1-7 easily a dozen times, I’ve lost count), yet they make us wait a tortuous two years to leave us in despair??? WTF?

GoT has intelligently said so much that we could relate to in our world about politics, the social order, diplomacy (or lack thereof), feminism, and all there is to know about war. The dialogue has been as rich and as the awesome CGI effects, as awe inspiring as Dani’s dragons. (By God! I want one of those effin’ dragons!) 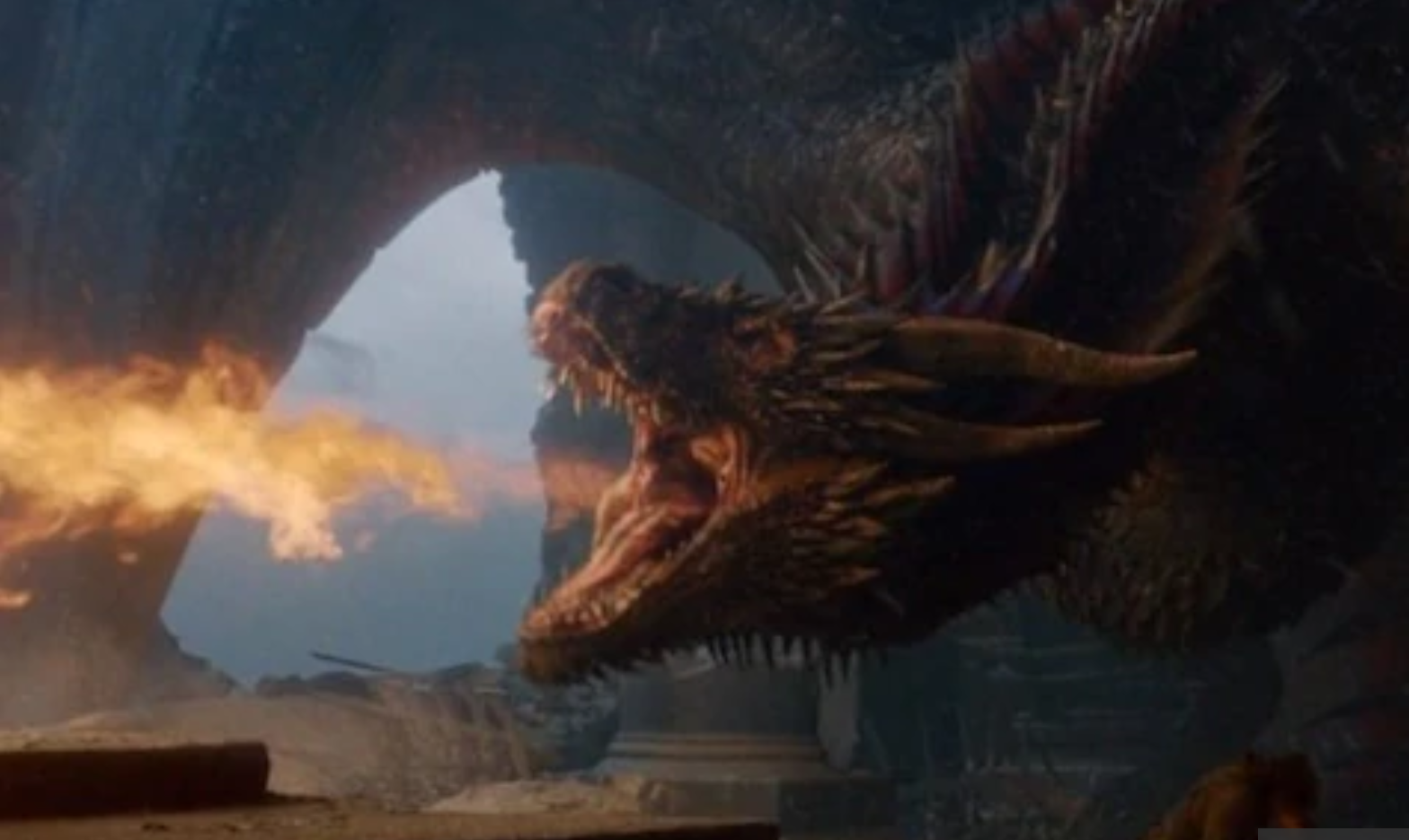 After seven seasons of reveling in the lives of the characters, of loyally showing up all excited to see what was going to happen next for 65 Sunday’s at 9 pm, from tasting the TV equivalent of filet mignon, to waiting two years (I will not forget this), to having Benioff, Wise & Martin serve us a six episode buffet of pablum? We’re supposed to be grateful for S8’s rare morsels of goodness, of being teased with micro-mini-versions of interactive character dialogue, like the Graham Norton-esque sappy reminiscing ’round the fire scenes of in E2…

Or E6’s chats between Tyrion and Varys? Even though this scene had the best dialogue… 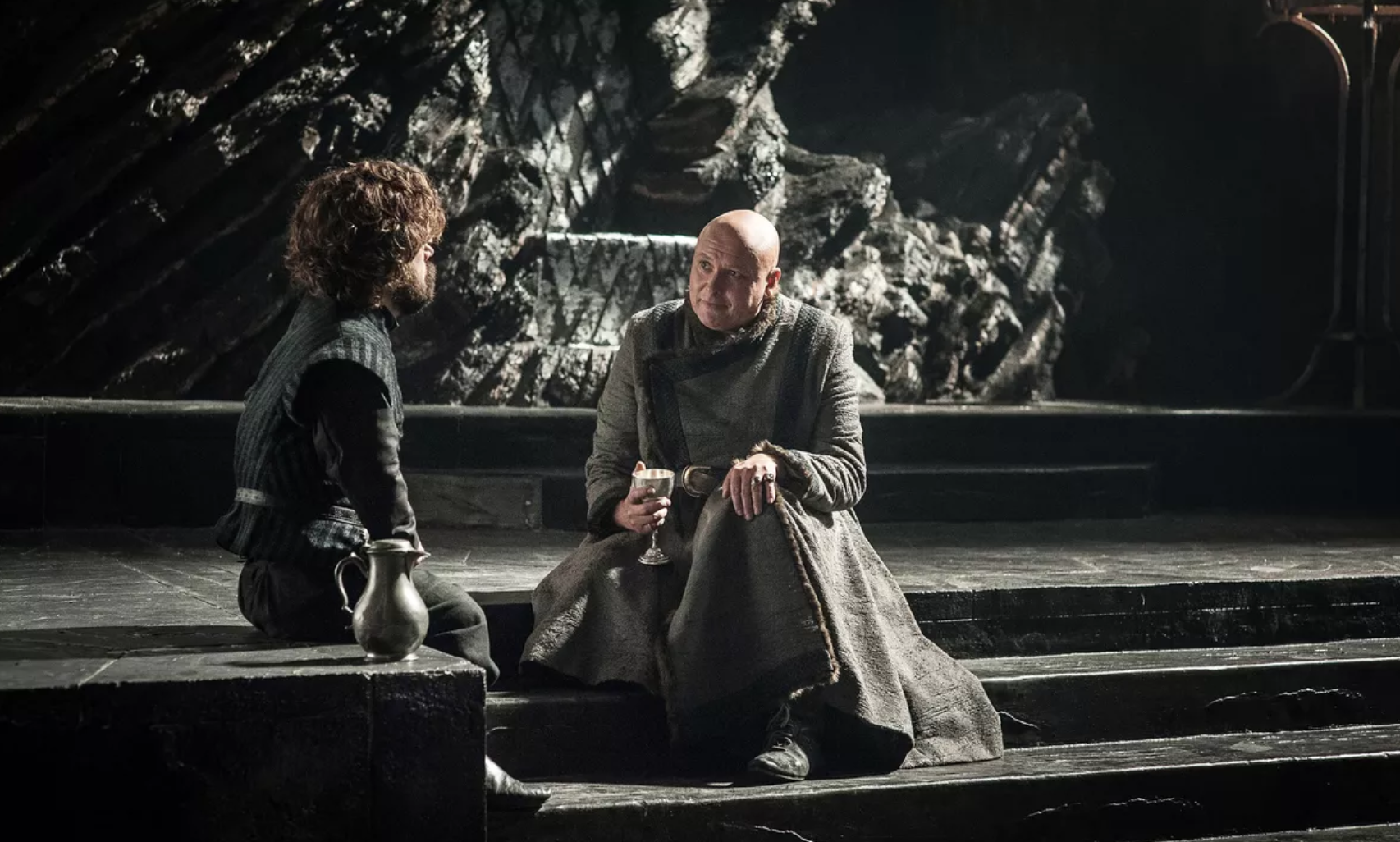 It was all too painful, despite being set amidst stunning visuals. Did anyone want to spend almost 2 whole minutes of the opening shots of E6 looking at a close up of Tyrion’s face and the back of his head? F*%k NO!!!

Whose idea was it to make Bran king of the six kingdoms? Who gave Tyrion the right to give instructions on how it should wrap up? How did Grey Worm go from a revenged filled vicious killer to sailing off into the sunset like the end of a Hallmark movie? At least Arya had previously told Lady Crane in S6 E6 that she wanted to see what was past Westeros, to see the end of the effin’ world, which set a president for her almost joyful departure, but still didn’t explain the effin’ horse!

We understood that Daenerys wouldn’t tolerate 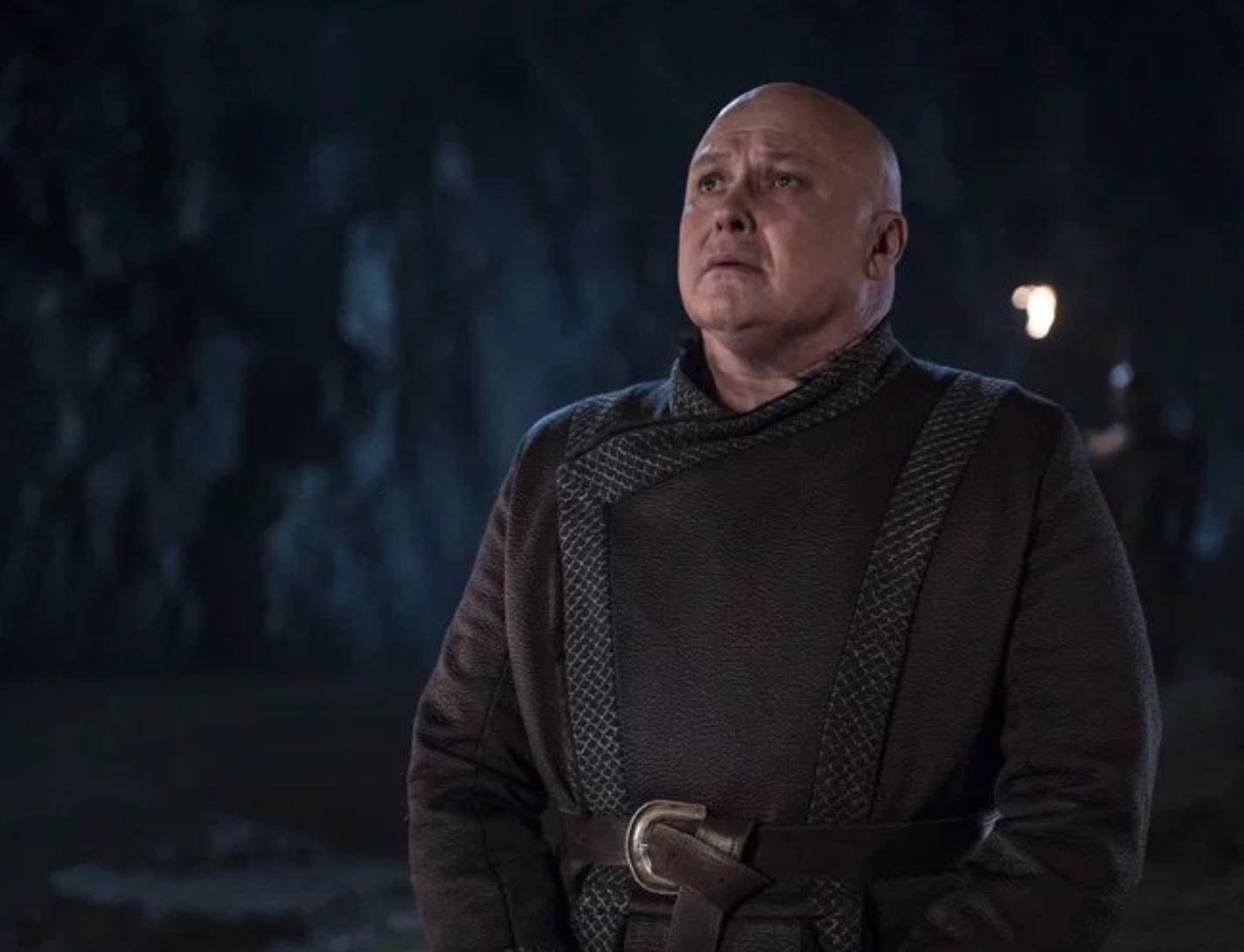 Varys’ treason, so Dorgon’s frying him to a crisp made sense and I cried like a baby. What about Sam, Gilly and their/her baby? We could see where Daenerys was going to lose her mind, that she and Cersei would get what was coming to them, though Cersei got off far too easy, all things considered – bitch deserved to die slow and hard, they should have allotted a few gory scenes for that so we could watch – though we did get to see Daenerys die by Jon’s loving hand and at the steps of her much coveted Iron Throne… 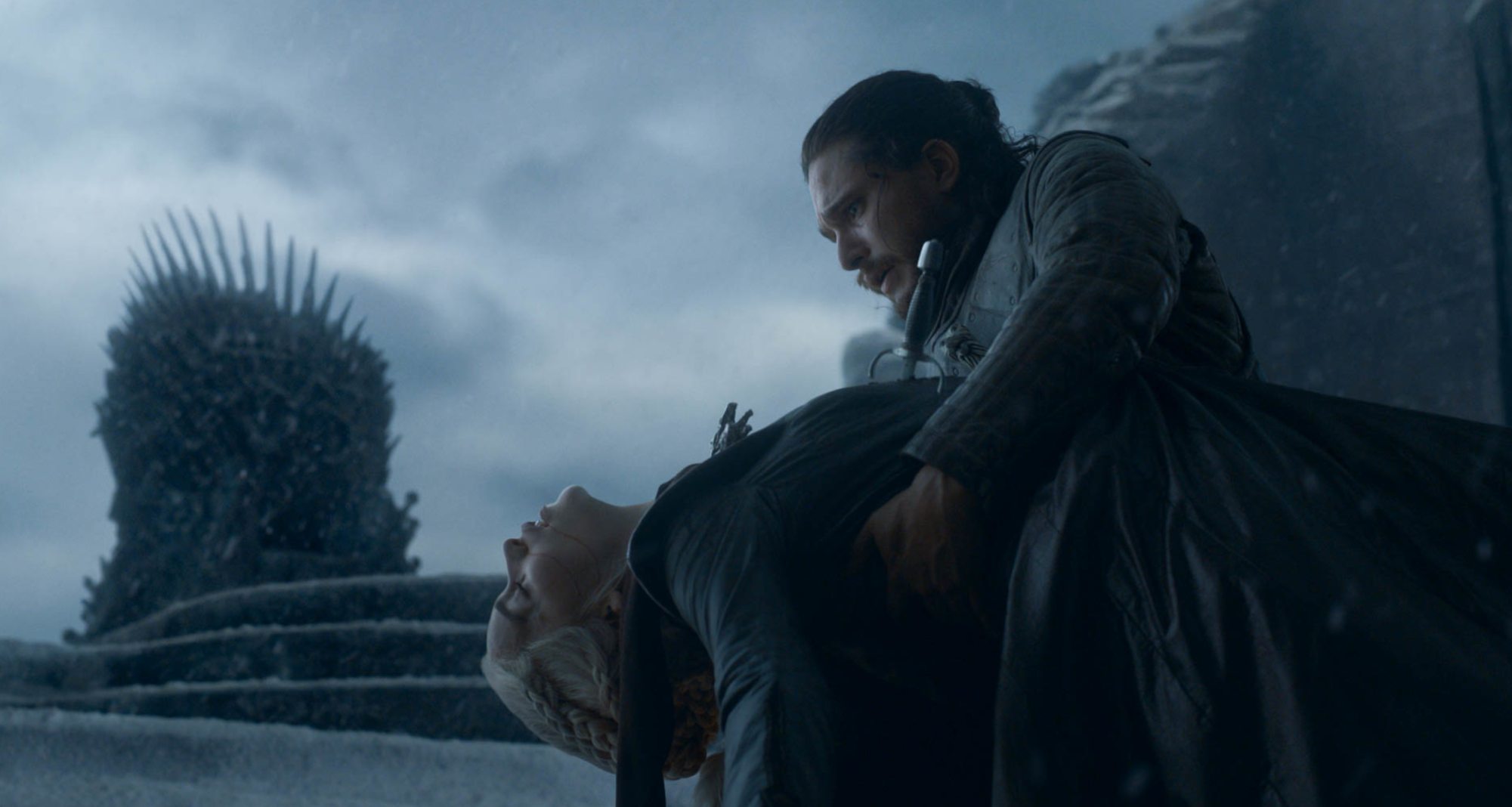 We always knew Jamie’s love/addiction to Cersei had no future and that he would never be cured, that his fate was sealed with hers, and that no tryst with Brienne was going to derail that train.

None of that was enough!!! They didn’t answer all the questions many of us curious folk have and were hoping to leave with. And it doesn’t help to know we may never get the answers, as Martin hasn’t been able to finish the series, he’s not getting any younger so he could die before completing them, and even if he does finish what promise is there that he won’t give us a book version of S8? I cringe at that possibility.

If all of this weren’t bad enough, I can’t even count the articles that have sprung up since Sunday trying to shove down my throat their contrived explanations of the S8 finale, E6 and/or the entire season for that matter. It’s disgustingly offensive, a lot of grabbing at straws, trying to make sense of what has no inkling of sense, like the white horse that 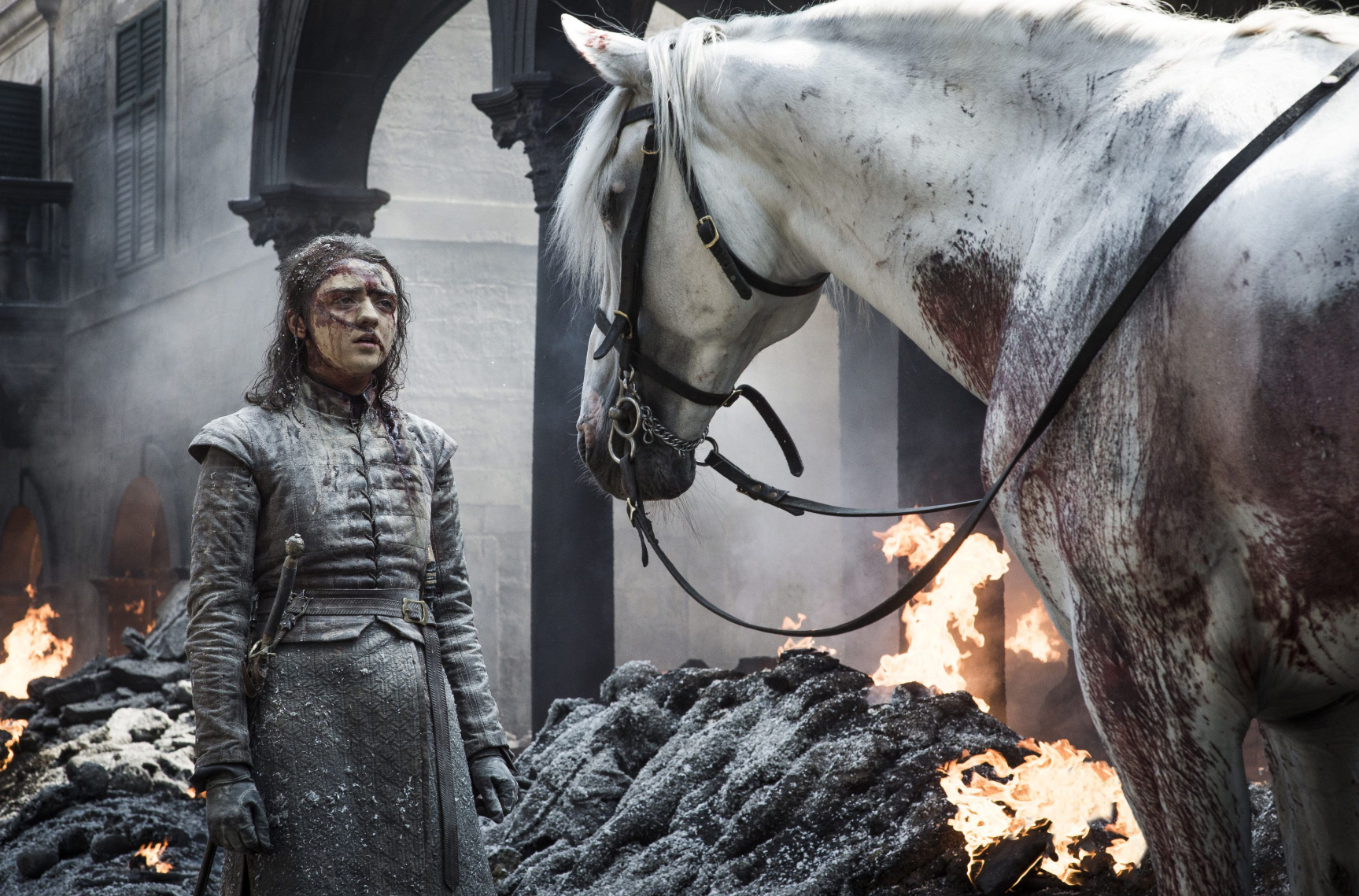 appears to Arya that she rides off on and that we never see again (WTF?). It’s definitely a sign of how many fans, in my humble opinion, are totally deluded and that this delusion stems from being so greatly disappointed. It’s hard to admit that Benioff, Wise and Martin could do this to us when we’ve been there for them, made Benioff & Wise’s success possible, followed Martin’s every word and deed… How could they???

If you’ve seen GoT S1-7, you’re a huge fan or just curious, the protective side of me wants to tell you not to watch S8, just keep your fond memories of the show intact, but I know… How could you keep from watching the last minutes of such a beloved program, how could you coldly walk away from a piece of your heart? I get it and maybe it would be a good idea to watch with the sound muted, the episodes are as visually stunning as the other 65, but don’t say I didn’t warn you, you won’t find closure, only more questions…